"What Are You Gonna Do?"

Season 4 is the fourth season of the Netflix television series Big Mouth. It premiered on December 4, 2020. This season was originally intended to premiere sometime earlier but production was put on hold due to the coronavirus pandemic.

Season 4 of Big Mouth focuses on anxiety, but not the political kind. The anxiety of growing up, of figuring out who you are, discovering yourself, accepting yourself. In the great Big Mouth tradition, the show continues to explore human sexuality and everything around it, including racial and sexual identity, love in all its forms, and having “The Hugest Period Ever.”[1]

As of Season 4, all of the main characters have graduated 7th grade and have moved onto 8th grade, after a three-episode story arc about their summer, which is spent primarily at Camp Mohegan Sun.

This season of Big Mouth has the overlying theme of anxiety, as is portrayed by Tito the Anxiety Mosquito, who torments just about every character in the series by bombarding them with tons of rational and irrational fears and doubts about the world around them. This becomes epitomized, starting with the episode "Four Stories About Hand Stuff", when Andrew goes into a state of thanatophibic (fear of death) paranoia, in lieu of the recent death of a character close to him.

This season also exhibits the struggles one goes through when moving to a new place and transferring to a different school, as seen with Jessi Glaser, when she's forced to move to New York City and make new friends at the prestigious private school, Darlington Pierce School, where she simply does not fit in and can only think about how much she misses her old friends at Bridgeton Middle School.

Another theme explored here in racial identity, where Missy learns from her very cultural cousins, Lena and Quinta how to get more in touch with her ethnic roots and act more black, after being raised in a "post-racial" household by a culture-blind white mom and a black dad who has completely forgotten who he is.

Coming out to one's family as a member of the LGBT community is also dealt with, in the case of Matthew, who comes out in a very conservative, Christian, all-American family. Matthews gets accidentally outed all to soon, when his mom discovers his dirty texts with his boyfriend, Aiden. The way both of his parents react exemplifies two very different ways such conservative people would respond to their son coming out as gay. 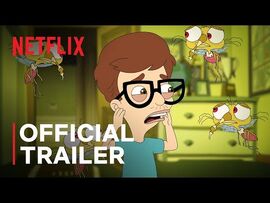