Start a Wiki
Queer Eye is a Netflix original series that serves as the 2018 reboot of the 2003 reality TV series, Queer Eye for the Straight Guy. The show had somewhat of a "crossover" episode with Netflix's Big Mouth when the main characters all voice acted for themselves in the episode "Disclosure the Movie: The Musical!", an episode that prominently featured the quintet in the side plot and played out the B story as though it was an episode of the actual show. 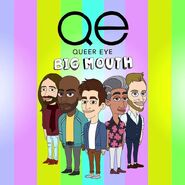 Add a photo to this gallery
Retrieved from "https://bigmouth.fandom.com/wiki/Queer_Eye?oldid=7061"
Community content is available under CC-BY-SA unless otherwise noted.