Cotton Candy Brandy is an alcoholic beverage for kids. It first appeared in "The Head Push".

Cotton Candy Brandy was created in a juvenile detention facility. Guy Bilzerian defended the brandy in court (which was taken to court for obvious reasons), but lost, due to him calling the judge a fat bitch. The detention facility later burned down.

Cotton Candy brandy is a bright pink, bear shaped bottle. The bear has a tie with a darker pink color, blushing where the cheeks would be, black eyes, ears which are part of the container. It has arms, legs and a dark pink snout. On the front of the Cotton Candy brandy is a sticker that has the words "COTTON CANDY BRANDY" written in bubble letter and pink and white letters (Pink, white, pink, are the respective colors). Under a pink rimmed white circle is a sentence saying "The first booze by kids for kids". 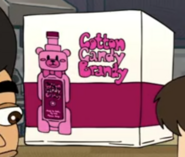 Add a photo to this gallery
Retrieved from "https://bigmouth.fandom.com/wiki/Cotton_Candy_Brandy?oldid=6214"
Community content is available under CC-BY-SA unless otherwise noted.